Steven Hale from the University of Birmingham has been named overall winner of #TechniciansMakeitHappen, a campaign celebrating the UK’s 1.5 million technicians. Steve is a member of the IST and we offer our congratulations to him.

The winning image captures a sunrise over the world-famous Mt Wilson Observatory in Los Angeles. Steven who works on cutting-edge robotic telescopes like the one in his picture will receive £1000, as well as career mentorship from industry experts.

The competition was launched last year by The Gatsby Foundation to encourage more young people to consider a career as a technician, as over 70,000 roles go unfilled each year in the UK. More than 300 photos were entered into the competition, showcasing the amazing things technicians build, make and create – from space equipment to sports kit, concerts and cars.

Steve Hale, University of Birmingham, said: “I am delighted to have been selected as the overall winner of #TechniciansMakeitHappen. There’s often very little recognition of the people working behind the scenes to build new technology or help make ground-breaking discoveries. I think campaigns like #TechniciansMakeitHappen are incredibly important to raise the public profile of technicians and showcase the diverse and exciting opportunities for young people who choose a technical career.” 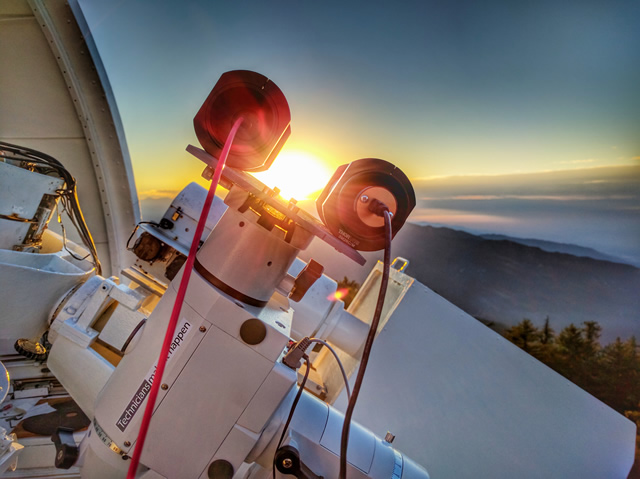 Image with kind permission of Steven Hale, University of Birmingham

The competition was judged earlier last month by an esteemed panel, including Jez Brooks at tech giant IBM and photographer Leonora Saunders, whose work has featured in national publications like the Guardian and The Sunday Times.

Leonora Saunders, said: “This image captured a stunning dawn that contrasted effectively with some impressive technology. This was a great ‘point of view’ shot that conveys the progressive and exciting work of a technician through an inspirational vista.”

In my role at IBM, I am focused on inspiring the next generation of IT professionals and technicians. The variety shown in the entries to the #TechniciansMakeitHappen photo competition demonstrates that a career as a technician is diverse, challenging and never dull!”

As part of the campaign, more than 25 industry leaders have pledged their support including the BBC, Royal Air Force, Mercedes AMG and Siemens. Compelling case studies, photographs and artifacts are touring the UK to inspire the next generation. To find out more, visit www.technicians.org.uk.