(As told to Andy Connelly)

Samantha recently gained a special commendation at the Papin Awards for her work as a Simulation Technician*. This is her #TechnicianJourney.

If somebody had told me when I left school that I would find a job I love and that it would involve making vomit out of soup, lemon juice, and parmesan cheese, I’d have thought they were winding me up. And yet, that is exactly what I spend my days doing.

Unfortunately, there were redundancies, pay cuts, and a big shake up. It was awful. As a way out, I went for a job at Buckinghamshire New University in the Faculty of Society and Health. I applied because the job title sounded so exciting – laboratory technician.

I didn’t really know what a laboratory technician was, but I had a vague idea it involved potions and lotions. Anyone who knows me knows I love that sort of thing, so I thought I’d give it a go. It took six weeks to hear anything after I applied, and I’d just about forgotten about it. I got the call and I was successful. I was gobsmacked, I couldn’t believe it. 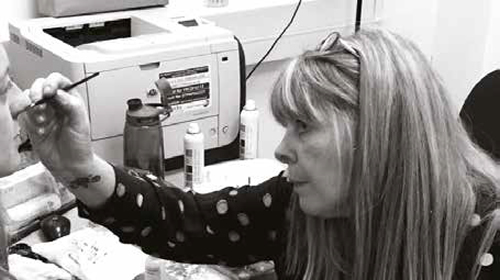 Looking back, what shocked me most was that two of the people who went for the role were nurses. I’m not clinically trained at all, I have no nursing background. When I went for the interview I only had GCSE level English and Maths and some qualifications I had gained while working as a teaching assistant. Getting the job really gave me so much confidence because I thought they must have really liked me.

I soon discovered the role was less about creating potions and more about supporting nursing students and setting up equipment for practical simulation sessions. In these sessions students could practice treating wounds and things like that. However, after I had been working there six months I was thinking, “I’ve made a huge mistake. I can’t work here, this isn’t the job I thought it was.” I’m not an emotional person but I was coming home and wanting to burst into tears because I really didn’t feel like I was getting anywhere. I didn’t want to just leave, so I decided to observe every single session I could to use my time wisely. In one session, the lecturer said to a student, “Pretend there is a wound on this arm.” I thought, why are they pretending? Why don’t I just put one on there? I’d never done anything like it before, but I thought I’d just give it a go. I now know that the art of applying makeup for training purposes is called moulage.

I’d never written a business case before but I believe that as you go through life, you can either be positive or negative. The trouble is, if you are negative you’re only affecting yourself. I went in positive, with facts and figures, to see the Head of School. I asked if I could go on a casualty makeup course at Ealing Studios and she said yes! I attended the course and my love affair with moulage really took hold.

I returned from the course and things really took off. There could be fifteen sessions all wanting wounds at the same time. Everyone wanted a piece of me – I physically couldn’t keep up. I was creating wounds on real people for lectures and for the simulation laboratory sessions. This just hadn’t been done before at the university, but it made a real difference to the students and the lecturers. Where other universities might do a bruise on a mannequin, we encourage our students and staff to be volunteers for moulage. They love having their image on social media with a wound.

I progressed onto making body fluids and stool samples. These were easier than the wounds as I could make them up beforehand. We mostly use household products to keep our costs down. Our latest  development is babies’ nappies. I’m not clinical, but being a mum of four, I know what the nappy would look like if one of my children is unwell. Our lecturers can now pass around a nappy and just say,“Tell me about that nappy. Does this child have colic? Is it breast fed?” Finally I was really mixing potions!

I still wanted more though. I wrote another business plan to change my job title. After lots of discussions a new job title, Skills and Simulation Supervisor,  was created and I was in this post for five years when a new post was created, Skills and Simulation Facilities Team  Lead, I applied and was successful.  I now have a team of five technicians who I have trained in moulage. We support over a thousand students each week who pass through seventeen simulation areas. We support students and lecturers in nursing, operating department practitioner, sport science, sport therapy, psychology, and crime scenes. I wouldn’t have had the confidence to do anything like this seven years ago.