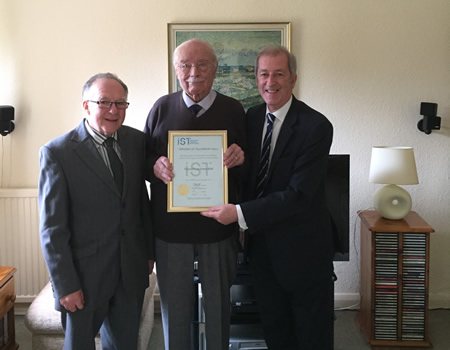 There is so much in the news these days about apprenticeships and how they can lead to excellent careers. However, apprenticeships have been achieving these results for over 75 years. Basil’s story starts in 1943 at the age of 16 when he started on his career pathway and became an apprentice at the University of Sheffield. This was short lived as at 18 he was called up for active service, eventually returning to the University in 1948.

Over the coming years he learnt many skills in Physics, Genetics, and finally Botany. Basil rose to the top of the tree by becoming Laboratory Superintendent in the Department of Botany in 1972. He held this position until his retirement in 1986. However, he didn’t stop there and he continued working part-time for the University’s Environmental Consultancy Services bringing a wealth of experience to this fledgling company. One thing he is remembered for is the creation of UBMA (University Bioscience Managers’ Association).

In 1983 Basil and David Smart brought together bioscience managers from across the sector under the umbrella of “The University Biological Supervisors’ Association (UBSA)” eventually changing its name to UBMA in April 2000. Basil was very influential in the sector and brought great recognition to the technical community throughout the UK; hence the award of Honorary Fellow.

His is a great example of how a technician’s career pathway has gone from starting at the apprentice level and advancing to that of Laboratory Superintendent.