“It was the stupidest thing this country ever did,” said Dan Kimball, the former US Navy Secretary, in an interview after the deportation of a Chinese-born Caltech scientist. “He was no more a communist than I was, and we forced him to go.”

One day in June in 1955, while professor Qian Xuesen was held under the charge of espionage, his wife managed to insert a secret note that he had scribbled on a cigarette wrapping paper into a letter to their relatives in Belgium, pleading for help to return to China sooner. The note eventually reached the office of the Chinese Prime Minister, Zhou Enlai, who initiated a political negotiation with the Eisenhower administration for Qian’s release in exchange for Americans held in China.

Qian with his wife and two American born children were finally allowed to leave the USA in August 1955 after five years of house arrest in Pasadena California on suspicion of being a communist spy. The accusation had abruptly ended his prominent career at Caltech’s jet propulsion lab.

“I do not plan to come back”, he told the reporters, “I have no reason to come back. I plan to do my best to help the Chinese people build up the nation to where they can live with dignity and happiness.” Two months later in China he was greeted by the newly established government as a national hero. “Qian is an undisputed genius”, pronounced the legendary Caltech professor, Theodore von Karman. The arrival of Qian had made the communist country more determined to develop its own space programme.

The world’s first satellite – Sputnik 1 entered an elliptical low earth orbit on 4 October 1957. A decade later the first Chinese space satellite, Dongfanghong-1 or Red East 30464, was launched successfully by a Long March 1 Rocket at Jiuquan Satellite Launch Centre (JSLC) on 24 April 1970. Dongfanghong-1 completed its mission of transmitting a radio signal to broadcast the Chinese national anthem. It had a mass of 173 kg, a diameter of approximately 1 meter, a rotational speed of 120 rpm and a design life of 20 days. China was so proud of becoming the fifth country in the world in history to send a satellite to space independently after USSR, USA, France and Japan. Perhaps it was not much of a surprise to hear the news that the development of Dongfanghong satellite series was directed by Qian Xuesen, Dean of the Chinese Academy of Space Technology. 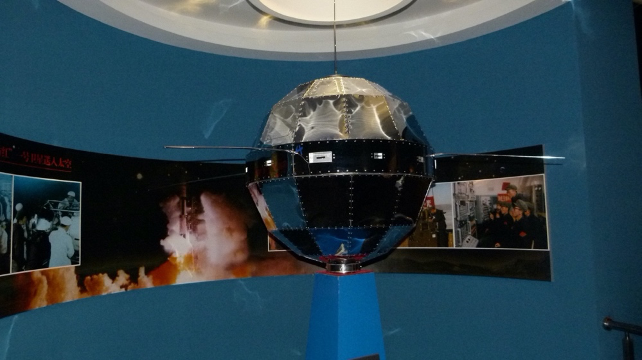 In April 1971, sooner after the success of Dongfanghong-1, Qian shared the news with his colleagues that the central government had committed to developing a Manned Space Programme. In the political mist of the Great Leap Forward that was still resonating throughout the mainland of China it was named Project 714 – Shuguang-1. As it transpired, Chairman Mao stamped a fingerprint on the proposal and provoked his paper tiger enemy by saying, “Americans only threw a potato to space, we will send a battalion.” Prior to this programme, China’s Space Medical Institute was founded in April 1968.  However, owing to the economic and political constraints, Shuguang-1 was put out of commission in March 1975. Not until 1978, when Deng Xiaoping was elevated to become the supreme leader in the dusk of the Cultural Revolution did China begin to enjoy a long-awaited renaissance in science and technology.

On 21 September 1992, the central government mapped out some high-level strategies to articulate the Manned Space Programme – the so-called Project 921. The first phase was to launch an unmanned spacecraft and establish preliminary test facilities for a manned spacecraft. The second phase was to break through the technical barriers of space walking, space module docking, and launch a space station for short-term lift support. The final phase was to build a space station to solve space application problems for long-term life support. On 19 November 1999 the first Chinese unmanned spacecraft, Shenzhou-1, was launched by a Long March 2F (LM-2F) Rocket from JSLC, which after 21 hours of flight returned to Siziwangqi Satellite Collection Site (SSCS). Shenzhou-1 consisted of 4 segments: a power module, a return module, an on-orbit module and an engineering module.[i] The spacecraft assembly had a total mass of 7.85 tonnes, a length of 9.25 m, a diameter of 2.8 m and a span of 17 m. The return module was designed to have a cavity volume of 6 m3 for carrying a maximum of 3 passengers and to last a design life of 20 days.

In the mission to conquer outer space, some interesting items were featured on board: a patriotic Chinese National Flag, a memorable Macau Regional Flag, a desirable Olympic Flag; various symbolic stamps, some life-saving plant seeds, believe it or not, and some soothing Chinese herb medicines.

The second, third and fourth unmanned spacecrafts, Shenzhou-2, 3 and 4 were launched in confidence from JSLC in the following months between 2001 and 2002. On board of Shenzhou-3 and 4 it carried a dummy to collect scientific life support data for future Taikonauts. 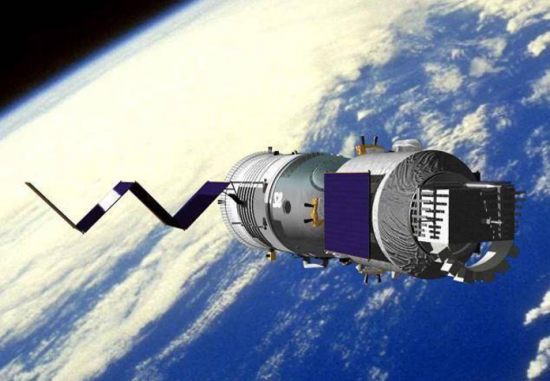 “What you have achieved is much more complicated than mine, so I say, you have surpassed me! Many congratulations!” smiled the 92-year-old Qian with delight as he lay in bed. He stretched out his warm hands to receive the salute from the first Chinese Taikonaut, 38-year-old lieutenant colonel Yang Liwei and his colleagues, after their successful mission on Shenzhou-5; the first Chinese manned spacecraft launched on 15 October 2003. China had become only the third country in the world that could independently send manned spacecraft into space after the former Soviet Union and USA. Shenzhou-5 had completed a journey duration of 21 hours and 22 minutes. The news of both launch and re-entry appeared on the Chinese Central Television (CCTV) news channels within minutes after the events. It is worth noting that on its seventh lap Yang presented both a Chinese national flag and a United Nations flag saying “My feeling is good, I say hello to people of every country on the Earth, say hello to the colleagues in space, and thank the people’s support from my own country.” His in-flight activities included a 3-hours sleep, reading various books, speaking to his family, and having Chinese cuisine for lunch. The state media reported that plant seeds from Taiwan were brought on board to epitomise the peaceful endeavour of united solidarity. He emerged from the return module 15 minutes after landing and waved to the camera in good health. 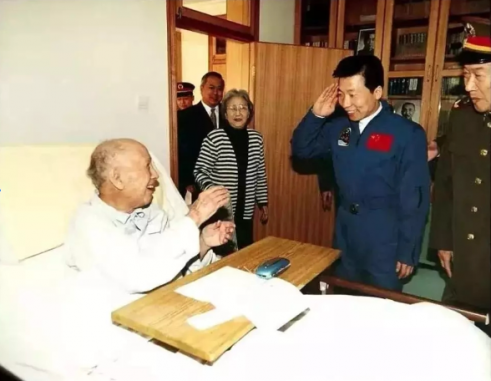 In keeping with this tradition, the Taikonauts continued to visit Qian to show their respect soon after the missions of Shenzhou-6 (2 Taikonauts) on 12 October 2005 and Shenzhou-7 (3 Taikonauts) on 25 September 2008. Shenzhou-7 symbolised the commence of the second phase of the Project 921.  The mission of Shenzhou-7 lasted for a duration of 3 days. On 27 September the crew commander, Zhai Zhigang, slipped out of the on-orbit module saying, “My body feels very good, I say hello to people around my country, I say hello to people around the world.” He waved a small-sized national flag and in about 15 minutes he returned to the on-orbit module to accomplish the first Chinese spacewalk. On 31 October 2009 Qian Xuesen, known as “King of the Chinese Rocketry” and “Founder of the Chinese Space Programme”, died at the age of 97 in Beijing. He did exactly what he had promised, dedicating his lifework to the development of the Chinese Space Programme.

On 29 September 2011 the first Chinese prototype space station, Tiangong-1 (named after the Heavenly Palace for the Lord of the Imperial Court according to Chinese mythology), was launched by a Long March 2FT1 Rocket from JSLC. The Washington Post wrote of this event, “China space lab Tiangong-1 or Heavenly Palace gives the country its first foothold in space.” China Aerospace Science and Technology Corporation (CASC) laid claim to the nature of originality and ingenuity in its architecture and design of Tiangong-1. This pressurised space laboratory station had a mass of 8.5 tonnes, a length of 10.4 m, a diameter of 3.35 m and a design life of 2 years, aiming to support a maximum of 3 Taikonauts in an artificial living environment.

On 31 October the eighth Chinese unmanned spacecraft, Shenzhou-8, was launched by a Long March 2F Rocket from JSLC. In the shadow of the Earth on 3 November, for the first time, Shenzhou-8 under the ground control was precisely and automatically docked with Tiangong-1. The second docking took place in the sunlight on 14 November. The return module of Shenzhou-8 safely deorbited and landed in SSCS on 17 November. This mission also carried a series of experiments on biological samples from Germany and the European Space Agency.

On 16 June 2012 the fourth manned spacecraft, Shenzhou-9, was launched from JSLC. The docking of Shenzhou-9 with Tiangong-1 occurred on 18 June. The commander Jing Haipeng led the way into Tiangong-1, followed by Liu Wang and their female colleague Liu Yang. On 29 June, after 12 days of flight, the Taikonauts piloted the return module of Shenzhou-9 back to SSCS. On 11 June 2013 Tiangong-1 received its final visit from the crew of the fifth Chinese manned spacecraft, Shenzhou-10.

On 15 September 2016 Tiangong-2 was launched from JSLC. On 20 April 2017 the first Chinese Automated Cargo Spacecraft, Tianzhou-1 was launched from Wenchang Satellite Launch Centre (WSLC) by a Long March 7 Rocket. It had a mass of 12.91 tonnes and a cargo capacity of 6.5 tonnes. On 27 April, Tianzhou-1 docked with Tiangong-2. On 17 October Shenzhou-11 entered orbit and coupled with Tiangong-2 for 30 days. On 19 July 2019, Tiangong-2 re-entered the Earth’s atmosphere and finished its mission.

In contrast to the Chinese exclusion policies from the USA government, China welcomed space scientists from the world. It seems certain that Qian’s colleagues will take the courage and continue to explore the vast outer space, deeper and further. In his article of China’s Rendezvous in Space, Evan Osnos from The New Yorker wrote, “Watching China hurl one object after another into orbit, one can’t help but wonder if it says less about China’s dynamism in technology than about the obstacles it faces in becoming a true world leader.” 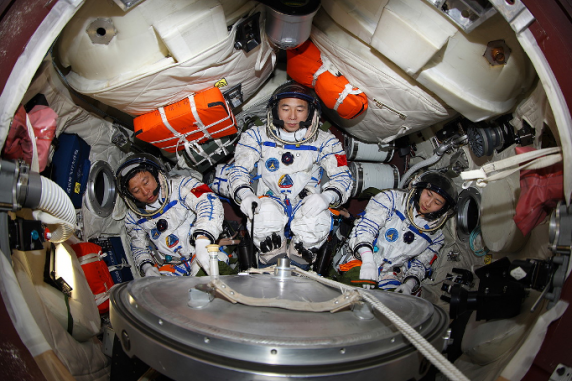 Dr Daxue Sun (Chartered Fellow Engineer of Institute of Mechanical Engineer, Chartered Scientist & Member of the Institute of Science and Technology) is the Design & Analysis CoE Lead of Engineering Design Capability of Sellafield Ltd. His role in Engineering Capability is to provide technical leadership, strategic management and tangible engineering solutions in design, analysis, assessment and structural integrity to the nuclear decommissioning process. In his spare time, Daxue is a contract columnist of a writing APP – Zine, and collectively has been writing and publishing in English & Mandarin over 150 articles in the last 3 years. He is a visiting foreign professor of Liaoning Science and Technology University, and a visiting foreign lecturer of Northeastern University in China.