Forensic toxicology is the science of applying the principles of analytical chemistry and toxicology for medico-legal purposes. Forensic toxicology subjects cover death investigation and those aspects related to behavioural or human performance, such as impaired driving due to drug consumption, steroid use by athletes, and workplace drug testing. The aim of this work is to highlight the importance of such a discipline through the study of the analytical performance of AMES polydiagnostic centre, a laboratory accredited with the Italian National Health service for forensic analysis, with operational offices present throughout the Italian territory.

Forensic toxicology is defined as the science of applying the principles of analytical chemistry and toxicology for medico-legal purposes. The results of these analyses can be used in court or for administrative actions. This science is continuously expanding and covers death investigation, undeclared prescription of drugs, medical errors, diagnosis and management of patients with drug over dosage, chemical/toxin exposure, aspects related to behavioural or human performance (e.g. impaired driving due to drug consumption, steroid used by athletes) and workplace drug testing.1

In general, forensic toxicology can be divided in two areas:

Post-mortem toxicology can be defined as the investigation\quantification of drugs (e.g. antiepileptic, neuroleptics), poisons, alcohol or any other chemical aimed to establish their impact on death.3 The quantification of the chemical concentration in blood or in any other tissue is important in order to establish a cause-effect relationship.3 For example,  analysis of human hair fibre gives information on drugs used and their time distribution (results are normalized on the average hair growth).4-5 Similarly, analysis of body parts contaminated with residues of paint, gunshot, drugs or body fluids can be used to link individuals to crimes.6

However, death investigation toxicology can be strongly exposed to errors, in sample handling or testing sensitivity, post-mortem artefacts, and in drug redistribution in the body.  In particular drug movements from blood to organs such as liver, lung, and brain have different rate constants that lead to different concentrations. The quota of drug in the blood or a specific organ can be used to predict the concentration in another tissue and this estimation can then be used to evaluate the toxicity. However, such appraisal is complicated by the redistribution that takes place after death and that can potentially result in an organ having increased drug concentration (sometimes 10-fold) compared to that before death.  Examples of molecules that exhibit this phenomenon are antidepressants and pain killers, which are redistributed at higher quantities in the liver. 7,8,9,10,11

A further constraint is due to tissue\organs damage (e.g. dehydration) and death that lead to altered intracellular metabolism and the impossibility of applying all the assumptions on population pharmacokinetic data such as drug clearance, volume of distribution, and elimination half-life.12

Finally, the forensic toxicologist has to face the limitation in sample size, which impacts on the number of tests that can be performed and reproduced with an acceptable degree of certainty.13

Behavioural or human performance toxicology is the analysis of the presence, use, or abuse of substances found in illicit trafficking and with no legitimate medical use. Such compounds are classified in five classes: Narcotics, Depressants, Stimulants, Hallucinogens and Anabolic steroids.14

Samples for these investigations are obtained from living humans, and avoid the interferences due to post-mortem drug redistribution.  However, as result of metabolism different windows for detection must be considered. For example, heroin and cocaine may be detected in urine or saliva if used up to a week before, while marijuana can be detected until a month. These matrices are mainly used in workplace drug testing.  The same drugs deposit in hair for months.  This type of sample can also be used to detect long-time exposure. However, some drugs persist in blood for just a few days. Consequently, this is the only matrix that can be used to assess the “state of psychophysical alteration due to drugs of abuse” in criminal proceedings.15, 16, 17

Analytical techniques commonly employed in forensic toxicology can be classified in immunoassays and chromatographic methods. Immunoassays are biochemical tests that measure the presence or concentration of a molecule in a solution through the use of an antibody or an antigen. Consequently, the range of immunoassays available is still in the hands of the reagent manufacturers. Such tests are mainly used for the screening of urine for drugs of abuse, but interferences due to other drugs or non-drug compounds present accidently or deliberately added must be considered.18,19 In general, immunoassays are simple and quick to perform but they have a degree of cross-reactivity with other molecules that cause problems. This limitation of specificity may be due to a number of factors such as the structural and conformational similarity of many drugs, allowing antibody binding to occur with members of different drug groups; the non-specific nature of the indicator reaction used with homogeneous immunoassay due to inhibition of enzyme activity or consumption of co-enzyme; the presence or generation of a high background absorbance preventing measurement.20

Chromatography is the most used technique in forensic toxicology due to its flexibility and the capacity to allow the separation and identification of most compounds of toxicological interest. It is a process in which a chemical mixture carried by a liquid or gas is separated into components as a result of differential distribution of the solutes as they flow around or over a stationary liquid or solid phase. Chromatography requires high degree of skill to keep the instrumentation working well and obtain reliable results. The different chromatography techniques vary according to the different extraction techniques, stationary phases, derivatization mechanisms, and detectors.21

In particular, Gas Chromatography (GC) is a robust technique in which the mobile phase is a carrier gas, usually an inert gas such as helium or nitrogen, while the stationary phase is a microscopic layer of liquid or polymer on an inert solid support, inside a metal tubing called a column. The gaseous compounds being analysed interact with the walls of the column, which is coated with a stationary phase. This causes each compound to elute at a different time, known as the retention time of the compound.22Detectors linked with this technique measure the exact molecular weight of the analyte (GC-MS) or work with a flame ionization (GC-FID).  However, many drugs analysed in toxicology, including the amphetamines, the cocaine metabolite benzoylecgonine and a number of benzodiazepines, are unstable at GC temperatures or produce marked peak tailing and, therefore, are usually prepared using trimethylsilyl, trichloroacetyl, trifluoroacetyl, heptafluorbutyryl, pentafluoro- benzoyl and propyl derivatives.23

High-performance liquid chromatography (HPLC) is a technique in which a pressurised liquid solvent containing the sample mixture pass through a column filled with a solid adsorbent material. Each component in the sample interacts slightly differently with the adsorbent material, causing different flow rates for the different elements and leading to the separation of the components as they flow out of the column. Different types of detectors (e.g. ultraviolet, electrochemical or fluorescence) are used to quantify the sample.  HPLC has overtaken GC in popularity for toxicology determination and can provide a high degree of flexibility with reduced risk of compound degradation during analysis.24, 25

In liquid chromatography- mass spectrometry (LC-MS) the components are separated according to the same mechanism of HPLC, while mass spectrometry provides structural identity of the individual elements with high molecular specificity and detection sensitivity. LC-MS is the technique with higher flexibility and precision.26

In general, GC-MS, LC-MS and HPLC are used for the quantification of non-volatile molecules, while volatile substances such as ethanol, methanol, and acetone are analysed using gas GC-FID.27 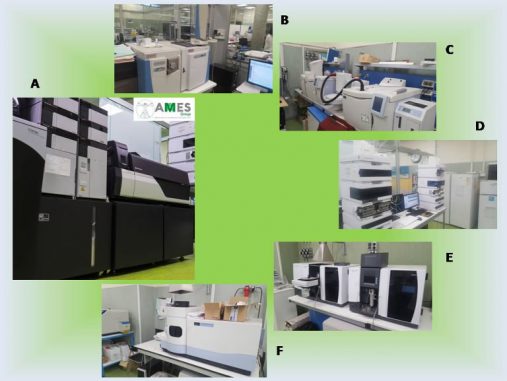 AMES Polydiagnostic Centre is a private laboratory with forensic sector accredited at the Italian National Health service for forensic and industrial toxicology.  As shown in figure 2, forensic samples arrive from all over Italy.  This wide distribution offers an opportunity to obtain an accurate population study.

Figure 2. Distribution of forensic samples in the Italian territory

The behavioural or human performance toxicology analysis represents by far the main portion of work for AMES. More of the 95% of such investigations fall within this area while in comparison post-mortem toxicology is 100 times less (data 2018; figure 3). 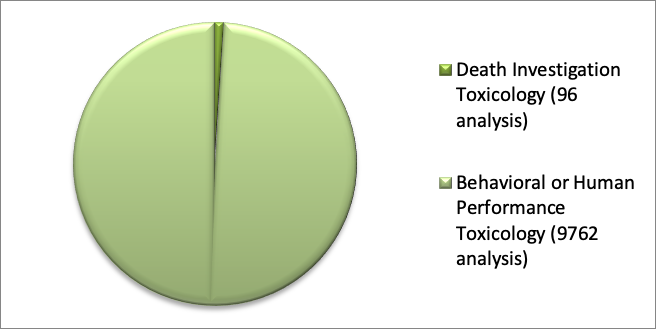 The greater percentage of behavioural or human performance toxicology analysis relates to alcohol abuse or drugs. In 2018 a total of 5867 tests were done relating to the quantification of carbohydrate deficient transferrin (CDT) as a marker of heavy continuative alcohol abuse (CDT is impaired when there is a daily intake of 50- 80 grams of alcohol for at least 2 weeks) and 3472 analyses were completed regarding the screening of urinary samples for drug testing (Marijuana, Cocaine, Amphetamine, Methamphetamine, Morphine and Buprenorphine). In addition, 296 tests were made by gas chromatography-flame induction detection to determine the level of ethanol in blood.  Less other behavioural or human performance toxicology analyses were in relation to the quantification of neuroleptics, steroids and metals.  (figure 4)

In 2018 the analyses in the area of death investigation toxicology was done by AMES in collaboration with the laboratory of legal medicine at the University of Naples “Federico II”.  Here, almost the totality of requested analyses regarded the quantification of antiepileptics, neuroleptics and antidepressants in post mortem peripheral blood, brain blood or homogenised tissues by liquid chromatography- mass spectrometry (LC-MS/MS).

This article is useful to highlight the importance of forensic analyses for private clinical laboratories.

Although AMES performs almost a million analyses a year only 1% relate with forensic toxicology. However, even this low number has a strong influence on company turnover as toxicology analyses have a significant high profit margin.  In conclusion, this article aimed to explain how the field of Forensic Toxicology is continuing to expand, and that it will be important for a successful laboratory to improve this area of business.

Dr Raffaele Conte, PhD, FIScT, RSci is the director and responsible chemist of the toxicology laboratory of AMES polydiagnostic centre in Casalnuovo, Italy and a research associate of the Research Institute on Terrestrial Ecosystems of the Italian National Research Council (CNR) in Naples, Italy. Apart from his working activity on the detection of drugs and metabolites in biological matrices, his research interests are focused on the design of novel delivery platforms able to minimize degradation, prevent undesirable side effects, and increase bioavailability of drugs or genetic materials. He also follows different projects as an independent researcher and has authored several research papers. In 2018 he obtained a PhD in clinical and experimental medicine at the University of Naples “Federico II” with a project on the synthesis of polymeric fillers with anti-biofilm activity for dental composites. His email address is raffaele.conte86@tiscali.it