The Chinese economy continued to gain a global stature in the last few decades. In June 2018, the prestigious Guildhall in London hosted the FT-Ocean Nuclear Global Investment Summit. Among the key industry players, from the world of nuclear and finance, the ambassadors from the Chinese Nuclear Industry delivered a strategic message – “China wants to secure an international reputation in nuclear building. The UK is a step stone to achieve that, but the final decision is chosen by the British people.” Intangible thoughts get stretched beyond the comfort zone. People start to ask questions why the Chinese are so keen in developing global nuclear energy? A barrage of criticism has since started firing at the Tory government because the national security in sensitive sectors such as the Hinkley Point C nuclear project with the Chinese involvement could be compromised without rational scrutiny. Would the British government be willing to take the risk of damaging the strategic relationship with its Western Allies? Would the Chinese politicians treasure the criticism of their human right record from the international community as a counterbalance measure? At the dawn of a new era of Brexit, the spectre of anxiety is hanging over the EU. It is perhaps worthwhile then to highlight some of the history around what has happened in the Chinese Nuclear Industry, regardless of the promise of cheap wind, the ensuing political argument and the fate of the nuclear new build in the UK.

After defeat of the Nationalists in 1949, the inexperienced Chinese Communist government faced a daunting task at the beginning of their nuclear ambition. The ancient Chinese philosopher Lao Tzu used to say that a journey of a thousand miles starts with a single step. In 1954, Nikita Khrushchev, a former Soviet Union leader as the First Secretory of the Communist Party, landed in Beijing for his first-time visit. In the summit meeting, Chairman Mao requested his Russian counterpart to assist China to construct a nuclear reactor, but Nikita rejected Mao’s proposition. The main-land Chinese leaders were resilient and determined to move forward independently. However, no sign of any significant progress was being made in the development of civil nuclear power until Shanghai Nuclear Engineering Research and Design Institute was founded in 1970. Its nuclear programme was delayed because of the Great Leap and the Cultural Revolution in a context of political turmoil and economic chaos. After a decade of economic rejuvenation, the first prototype design of a small-scale of PWR (300MW) was complete in the early 1980s with some technical support from Japanese Mitsubishi (pressure vessel), German KSB (PER700 pump) & American Westinghouse (turbine). It was transpired that most of the components were designed and manufactured by the Chinese national manufacturers. In March 1985, the construction work of the first Chinese nuclear power plant – the so-called Phase I of the Qinshan nuclear power project, began in Qinshan of Zhejiang province. Phase II of the Qinshan nuclear power project was commissioned in 1987. In December 1991, the power plant operation was officially handed over and merged into the national grid. The generator of steam turbine of 600MW PWR reactor was fabricated by Spanish ENSA in accordance of the standards (1995) of Westinghouse. One of the cranes was manufactured by Spanish BWE. 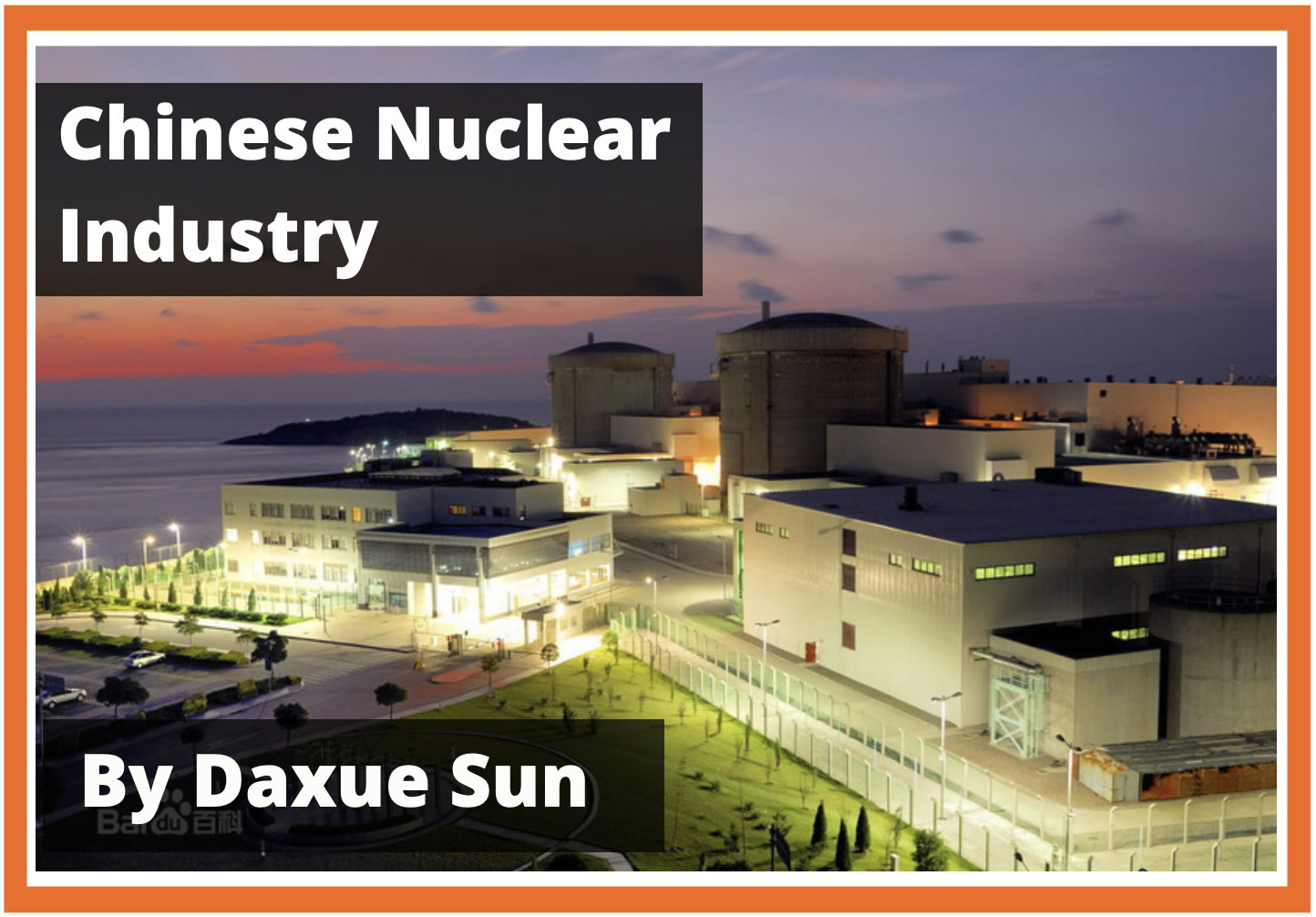 The second Chinese nuclear power plant was commissioned in Daya Bay in Longgang District of Shenzhen of Guangdong Province in1987. Building a nuclear power plant that was geographically close to Hong Kong proved to be controversial at the beginning because of the Chernobyl disaster in 1986. Primarily the opposition focused on the environmental issues and the human rights of the Hong Kong residents. On 23 September 1986 the representatives from the Guangdong Nuclear Power Joint Venture Company and the British and French suppliers officially signed the key contracts. The nuclear power plant originally consisted of two 944 MWe PWR nuclear reactors based on the French Framatome ANP French 900 MWe three cooling loop design, in collaboration with the Chinese General Nuclear Power Group. These reactors started commercial operation in 1993 and consequently began to supply 80% of electricity consumption in Hong Kong. Daya Bay had an excellent safety record and much to people’s surprise won four of the six prizes in the annual competition of nuclear power plant safety held by EDF Energy in 2011.

In 1995, aiming to raise its research capability and high-tech work experience in the area of fast reactor design, construction and operation, the China Institute of Atomic Energy commissioned the China Experimental Fast Reactor (CEFR) project in a suburb area of Beijing. The CEFR project was built by Russia’s OKBM Afrikantov in collaboration with OKB Gidropress, NIKIET and Kurchatov Institute. Its reactor had a design capacity of 65 MW thermal and 20 MW electric efficiency with a design life of 30 years and target burnup of 100 MWd/kg. The first criticality was achieved in July 2010 and a year after that electricity was generated on site. In an IAEA report published in 2008 regarding the development and research investment in fast reactors, it was noted that only France, Japan and Russia were still actively in the pursuit of fast reactor technology and other countries like Germany, Italy and USA were involved in the decommissioning process of their fast reactors. The advantage of fast reactor is that the total radiotoxicity of nuclear waste can be reduced based on the theory that all the nuclear waste is being used as fuel. The disadvantages of fast reactors are that building and operating are not cost-effective and critical mass is significantly higher than a thermal reactor, which could raise nuclear proliferation and nuclear security issues.

Based on the model of HT-7 initiated by the partnership between China and Russia in 1990s, the construction and assembly of the Experimental Advanced Superconducting Tokamak (EAST) HT-7U was completed by the scientists and engineers of the Institute of Plasma Physics Chinese Academy of Sciences in Heifei of Anhui Province in March 2006. The project aimed to conduct fundamental physics and engineering research activities on an advanced Tokamak fusion reactor. The EAST had three features: non-circular cross-sections, fully superconducting magnets, and fully active water-cooled plasma. It was similar to International Thermonuclear Experimental Reactor (ITER) in shape and equilibrium. By September 2006 the EAST HT-7U was in operation and achieved its first plasma. It became the first Tokamak to deploy superconducting toroidal and poloidal magnets in experiments. On November 2018, the EAST HT-7U had delivered a milestone of successfully sustaining H-Mode plasma for over 100 seconds at 100 million °C.

The nuclear accident of Fukushima happened on 11 March 2011 by the Great East Japan Earthquake and Tsunami and was the level 7 event classification according to the Internal Nuclear Event Scale (INES). It was the most powerful earthquake ever recorded in Japan and the fourth most powerful earthquake in the world since 1900. The International Atomic Energy Agency (IAEA) said that the Japanese Fukushima nuclear disaster caused deep public anxiety throughout the world and damaged the confidence in nuclear power for fears of rising radiation contamination. It was reported that after the disaster the IAEA halved the additional nuclear power generating capacity to be built by 2035. A few weeks before the Fukushima disaster, China revealed that it was launching a fresh challenge to build a safer, cleaner, and cheaper thorium reactor. The scientists from the Chinese Academy of Science claimed that it had chosen a much more environmentally friendly method such that the hazardous nuclear waste could be a thousand times less than the uranium, thus the system would be much less prone to disaster. The thorium-based molten salt reactor system was actually pioneered by the US physicists at Oak Ridge National Laboratory in the 1960s, but somehow further research work was dropped. Could thorium be the answer for the future Chinese nuclear power? So far China has built 46 nuclear power plants with a capacity of 42.8 GW and is going to put 11 more on its map with a capacity of 10.8 GW along its seacoast line. The net capacity will not exceed of 60 GW according to the Chinese government burgeoning development plan by 2020. 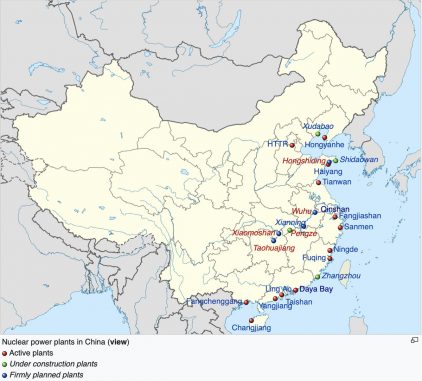 China is the most populous country and the third largest nuclear power producer in the world. No other country has doubts about the reason for Chinese’s nuclear energy ambition because nuclear power only contributes to 4-5% of its total electricity production. However, there is a huge public concern that tens of millions of people are populated near the nuclear power plants and could be exposed to nuclear radiation in the events of nuclear accidents in China. This world still has a long way to go for finding a safer, more economic and environmentally sustainable energy solution. India’s great moral leader Mahatma Gandhi once famously said that there’s enough on this planet for everyone’s needs but not for everyone’s greed. Today, Gandhi’s insight is being put to the test for the global demand in nuclear energy as never before.

Dr Daxue Sun (Chartered Fellow Engineer of Institute of Mechanical Engineer, Chartered Scientist & Member of the Institute of Science and Technology) is the Design & Analysis CoE Lead of Engineering Design Capability of Sellafield Ltd. His role in Engineering Capability is to provide technical leadership, strategic management and tangible engineering solutions in design, analysis, assessment and structural integrity to the nuclear decommissioning process. In his spare time, Daxue is a contract columnist of a writing APP – Zine, and collectively has been writing and publishing in English & Mandarin over 150 articles in the last 3 years. He is a visiting foreign professor of Liaoning Science and Technology University, and a visiting foreign lecturer of Northeastern University in China.